Two weeks ago Microsoft released a new version of Visual Studio Code (VSCode) which updated their default icon from a blue infinity sign, to something that looks a little strange and very orange.

Most people who do not use VSCode will probably fail to see what the big deal is. If anything, it looks much better as a stand alone icon. I use VSCode daily and for some reason that icon makes me mad.

For a few days I though I was alone, until I found a GitHub issue titled New VS Code icon is ugly!. In 9 days this issue rose to #3 most liked issues for VSCode of all time.

A quick Twitter search will also point to a lot of discussion about the new VSCode icon, including some very prominent developers.

Not a fan of the new @Code icon?
This one is pretty slick:https://t.co/Bd4xN7r2qV pic.twitter.com/luptgBG4mY

One of the main reasons I love VSCode is their steady release cycles, they run like a German train. The team does a great job listening to developers and cranking out new goodies every months.

Surprisingly, the team continues to maintain complete radio silence on this issue, even though they had two patch releases since the new icon went out. I have some thought on why that might be, but first I wanted to highlight some funny comments around this issue.

This is a very critical show-stopper for serious coding and needs to be changed.
source

It looks like they accidentally inverted the colors.
source

For me it looks like a fish in a tank. 🐠
source

I feel like I am opening files with adobe illustrator
source

It still looks like a fish about to get hooked. Previous icon shape and color was better IMHO.
source

The World Will Never Be The Same!
source

You return it back, I give up atom.
source

lol these comments are hilarious, and I agree with most of them — especially the one about it looking like a goldfish cracker hitting a wall.
source 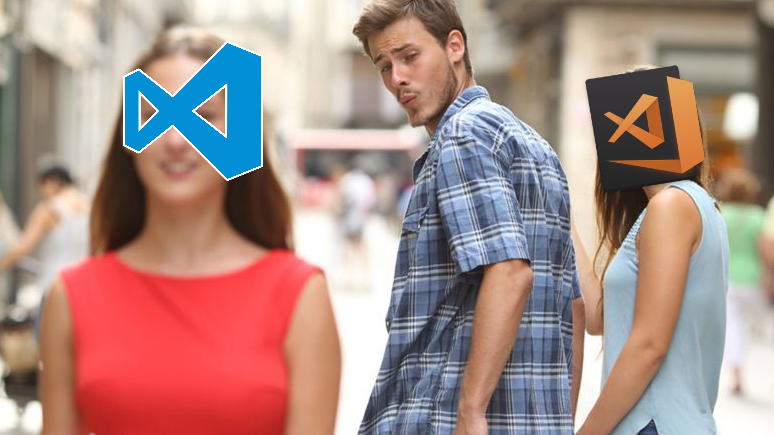 And finally after 150+ comments

Hey not sure if anyone has mentioned this yet, but I really liked the blue icon. Just wanted to let everyone know 👍
source

I have cried twice in my life: Once when they changed the @code icon and once when Little Sebastian died.

Guys, apologies for the fish shape – I thought we were doing an icon for “VS Cod” – must have lost an ‘e’ somewhere!

There is much more where it came from, but you get the idea.

I was having a good time with all of the Code comments, until I saw this Tweet from my former co-worker who is now a Program Manager at VSCode.

It made me realize just how unthankful I was with my response. Here is another Tweet that seems relevant.

Clearly the icon change was mandated top down. It appears to be an effort to get all Microsoft developer products under one umbrella. All icons for all product lines follow a similar design, and VS Code is no exception. This is probably used by business people to justify continuous development of Visual Studio Code.

After all, Microsoft pays a team of great developers to work on Visual Studio Code full time, without charging us a dime for it.

At the same time, for people like my self, it takes less than a minute to change the icon back.

Having to deal with an ugly icon is a small price to pay for a great editor.

VS Code maintainer Chris Dias closed the issue with the following comment:

Thanks everyone for all the feedback, and again we apologize for not responding sooner.

In a nutshell, we’ve decided to change the Stable orange to blue, and keep green for Insiders. You can read all about it in the blog post: https://code.visualstudio.com/blogs/2017/10/24/theicon

Resolving this issue against a single issue tracking all the icon issues: #35683